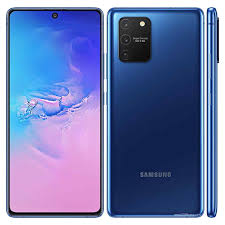 The Samsung Galaxy S10 Lite is announced officially in the first month of 2020. The smartphone has a Super AMOLED Plus 6.7 inches big capacitive touchscreen that provides a resolution of 1080 x 2400 pixels and features Always-on display and HDR.The phone comes with in-built sensors such as Fingerprint (under display, optical), accelerometer, gyro, proximity, compass along with Samsung DeX (desktop experience support) and ANT+.The device is fueled with a non-removable Li-Po 4500 mAh battery that allows a longer operation of the device in a single charge and fast battery charging lets you recharge your smartphone really quick.The smartphone on the rear side has a triple camera that consists of 48 MP (wide) + 12 MP (ultrawide) + 5 MP dedicated macro camera and features LED flash, panorama, HDR while on the front there is 32 MP (wide) for shooting selfies.The Samsung Galaxy S10 Lite is pack with 6 GB and 8 GB RAM with 128 GB internal storage that can be expanded with a microSD card up to 1 TB. The smartphone runs on an Android 10.0 + One UI 2 operating system and has an active noise cancellation with dedicated mic. The smartphone comes in various colors such as Prism White, Prism Black, and Prism Blue.