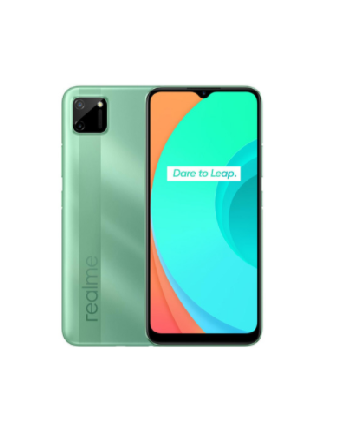 Tech giant Realme is unveiling C11, another smartphone of the company that is using the newly introduced chipset by MediaTek which is called Helio G35 chipset. The upcoming smartphone Realme C11 will possess the chipset that has not been used by any other smartphone. The new chipset of the new Realme’s C11 is expected to provide the user with outstanding performance. The chipset of the phone is fueled with gigabytes of RAM that is a sufficient amount of RAM capacity to run the functions of the Realme C11’s smoothly. The 6.5 inches IPS LCD Capacitive Touchscreen display screen is there to provide the user with a full HD plus resolution of 720 x 1560 Pixels. The new Realme sharp C11 is packing 32 gigabytes of internal storage capacity that can be further increased by using the shared SIM slot of the phone. The new Realme will introduce a triple rear camera setup in C11 to provide the user with what he wants. The main sensor of the phone will be 13+ 2 megapixels. The front-facing camera of the phone will be 5 megapixels to take outstanding selfies with the C11. The battery of the phone is also a massive one that offers 5000 mAh capacity. This is the high-end capacity of the battery that most of the high-end smartphones C11 offers. So with this battery, you will be able to keep the smartphone on toes for a long period of time. On the rear of the upcoming smartphone that is called C11 by Realme is a fingerprint reader that will improve the security of the phone to the next level. It will only allow the user to get access to the data. Samsung has got another competitor in the market that gives entry-level brands of Samsung a tough time. Realme C11 will be a good asset to the market.