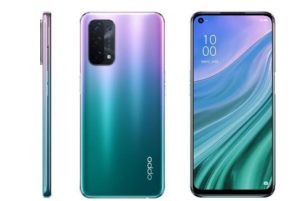 Chinese company Oppo will launch the A54 smartphone soon. On the Japanese website, au.com has now listed a new smartphone, if we look at the specifications, which looks like the already announced Oppo A93 5G. The key difference between the two handsets is the camera setup. The A93 5G has got a triple rear camera system, and the upcoming new Oppo A54 has a quad-camera setup. The smartphone is power with Mediatek Helio P35 chipset, and the chipset of the upcoming smartphone of the company also has a powerful one in Oppo’s A54 that will offer outstanding performance to make it one of the best choices for the customers, and it has a 2.0 GHz Octa-Core processor inside the hood. The upcoming smartphone Oppo A54’s going to have an IPS LCD Capacitive Touchscreen. The display screen of the device measures 6.51 Inches that will ensure full HD plus a resolution of 1080 x 2400 Pixels. And also there is a protection of Corning Gorilla Glass. The new Oppo sharp A54 is paired with 4 gigabytes of RAM that will ensure fast execution of multitasks. The smartphone is packed with 128 gigabytes of native storage. The storage is enough yet the microSD slot will give you an option to expand the memory status of the smartphone. The Oppo has a Triple Camera setup in the coming A54 smartphone. The main sensor of the device will be 13 megapixels wide, the secondary sensor is going to be 2 megapixels depth and the third camera of the A54 is going to be 2 megapixels macro which is really brillaint. And the front-facing selfie camera of the smartphone A54 will be 16 megapixels. The handset is also packed with a rear-mounted fingerprint sensor in A54 that will give you protection. Though the smartphone will not be having an in-display fingerprint scanner yet the rear-mounted fingerprint scanner is still a good choice. The battery of the A54 by Oppo is also a gigantic one with 5000 mAh capacity and also there is a fast battery charging of 18W. The new Oppo A54 is a great competitor of the Samsung coming brands.