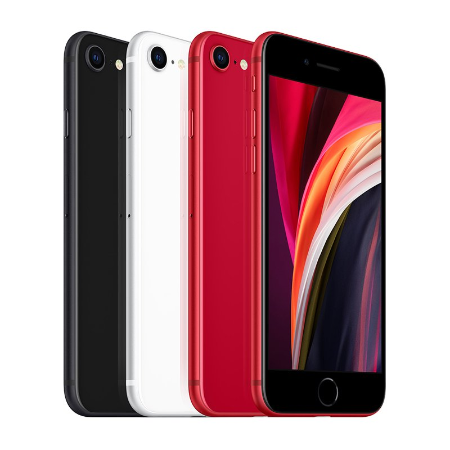 Apple in April 2020 unveiled a new low-cost iPhone, the iPhone SE, which is a follow-up to the 2016 iPhone SE of the same name. Like its predecessor, the 2020 iPhone SE is Apple’s most affordable iPhone, priced starting at $399.Unlike the original iPhone SE, which resembled an iPhone 5, the 2020 iPhone SE is identical to the iPhone 8 when it comes to design. It has a 4.7-inch Retina HD LCD display with True Tone to match the ambient lighting in a room, Wide color, Dolby Vision, and HDR10.Available in black, white and (PRODUCT)RED, the iPhone SE is built with a glass front and back with a color-matched aluminum band. Wireless charging is supported and it features IP67 water and dust resistance so it can hold up to splashes and even brief submersions in water.Because the iPhone SE is physically identical to an iPhone 8, it continues to feature thick top and bottom bezels. The top bezel houses the 7-megapixel front-facing camera and microphone while the bottom bezel includes a Touch ID Home button for fingerprint-based biometric authentication.The new iPhone SE is the only iPhone in Apple’s current lineup that continues to feature Touch ID over Face ID. Like other iPhones, it uses Haptic Touch for Quick Actions and contextual menus, with 3D Touch now eliminated from the iPhone lineup.There’s a single-lens 12-megapixel rear camera in the iPhone SE with an f/1.8 aperture, optical image stabilization, and support for Portrait Mode and Portrait Lighting. The iPhone SE does not have Night Mode, but there is Smart HDR, Wide color support, and more, plus an LED True Tone flash with Slow Sync capabilities.The iPhone SE’s camera can record 4K video at up to 60 frames per second with optical image stabilization and support for slow-mo video and time-lapse video. The front-facing camera supports Portrait Mode as well using the image signal processor and Neural Engine of the A13 Bionic.Inside, the iPhone SE is equipped with modern chip technology, featuring the same A13 Bionic chip as the iPhone 11, which Apple says is the fastest chip in a smartphone to date. The A13 Bionic has a dedicated 8-core neural engine that can perform 5 trillion operations per second, two Machine Learning Accelerators on the CPU, and a Machine Learning Controller for better performance and efficiency.When it comes to battery life, the iPhone SE lasts for 13 hours when watching videos, eight hours when streaming videos, and 40 hours when listening to audio. It is capable of fast charging and can charge to 50 percent in 30 minutes when using an 18W power adapter or higher.There’s no U1 chip inside the iPhone SE, but it does feature WiFi 6 support, which is the latest and fastest WiFi protocol, along with Bluetooth 5 and Gigabit-class LTE with 2×2 MIMO. It also has NFC with reader mode and supports Express Cards (transit cards) with a power reserve feature that allows cards to be accessible even when the battery is dead.